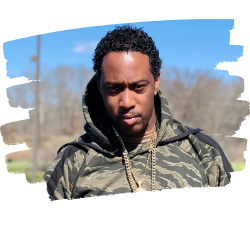 K Davis the Hitman (formally known as Mansone Batez) Is an American rapper from the Bronx, New York. With a solid fan base in the underground hip-hop community, K Davis is known for his lyrical storytelling and passionate grit infused delivery. Doug E. Fresh, hip-hop pioneer and legend, has served as uncle and mentor, inspiring K Davis throughout his career. Fresh describes his nephew as an “incredible lyrical talent and showman with a style that has evolved but stayed true to the essence hip-hop.”